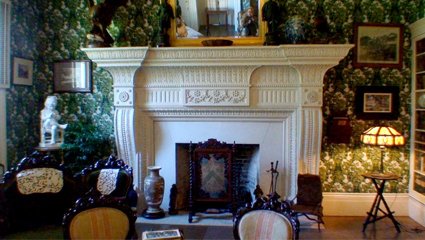 The Decorative Arts Collection is used to recreate the interior of the Banning Residence as it would have appeared during the late 19th century. Objects such as furniture and art work that belonged to the Banning Family are on display, along with period pieces that reflect the tastes of the time. Take a closer look at some of the fine pieces in the Friends of Banning Museum Decorative Arts Collection.

The furniture in the Decorative Arts Collection reflects a variety of styles from the 19th century including American Empire, Gothic Revival, Renaissance Revival and Eastlake. There are also novelty items, such as a steer horn chair with cowhide upholstery, which was a symbol of the vanishing frontier.

The house is decorated with paintings and engravings from the late 19th to early 20th century. Two special pieces of artwork are the large “Nocturne” paintings by Alexander Coulter and Jules Tavernier which were purchased by Mary and Phineas Banning in San Francisco in the 1870s. They have been restored and hang in the parlor in their original frames.

The Dining Room table is set four times a year with china from the Decorative Arts Collection. Different china patterns are displayed year round in the Butler’s pantry. The highlights of the permanent collection are several different patterns of Havilland, Limoges from the 1880s and 1890s including “Wedding Ring,” “Old Gold Bouquet,” and “Moss Rose.”