An Imaginary Conversation with Phineas Banning by Patrick Hannifin

Patrick Hannifin is one of our 2021 Wisteria Scholarship Award Winners. In this creative essay, he imagines a conversation with Phineas Banning. Patrick graduated from Banning High School and is an incoming freshman at UC Berkley. 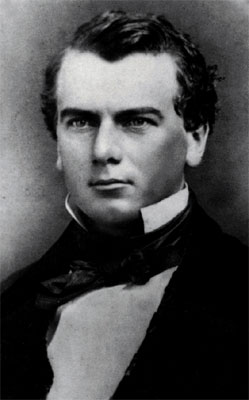 Hannifin: Hello Los Angeles and welcome to the LA History Podcast. For today’s exciting episode, we have invited the “Father of the Los Angeles Harbor”, Mr. Phineas Banning!

Banning: Good morning Los Angeles, it feels great to be on the show!

Hannifin: Great to have you here Mr. Banning. For those of you who may not know, Banning was the man responsible for most of the economic development of Los Angeles through his development of the port, his freighting business, and determination to connect Los Angeles to the rest of America. Now that our introduction is out of the way, we can begin by asking, what your early years were like?

Banning: I suppose we can start when I was about thirteen years old. Around that age I traveled thirty miles from my home in Wilmington, Delaware to my brothers law office in Philadelphia. There at his office, I was hired as a clerk. I worked there for some time, but as I got older I began to find an interest in the life on the port. Wanting to learn more about the port, I got a job for my other brother in his wholesale trading business.

Hannifin: It is truly fascinating to hear about how young you were when you received your first job. Not only did you receive a job at a young age but you were working at a law firm! Thinking about it, I am astounded since children in today’s world must go to school until they graduate high school around the age of 18. After that, many chose to go to a University so they can get the same job you held at your brother’s law firm. This brings me to my next question, how did you go from working with your brothers to starting a business in San Pedro?

Banning: In my early twenties I met a merchant that needed help going through Panama to get to Northern California. Noticing the opportunity to head west, I was hired to be a part of his crew. It was all smooth sailing until we reached Southern California. The whole crew and I were forced off the ship into San Pedro because debt collectors seized the ship. From there I saw an amazing opportunity to make some money in hauling goods for a local company. While working there, I met a man named David Alexander which I soon became a business partner with. The two of us branched out to form our own hauling business that transported goods from San Pedro to Los Angeles.

Hannifin: After starting your own business in San Pedro, how did you begin to expand your influence over the Los Angeles region?

Banning: Shortly after we created our hauling business, Alexander and I decided to expand our business to stagecoaches. To ensure that our stagecoach line would succeed, we invested in top of the line stage coaches to combat the rough roads of the west. Our stagecoaches would run routes to Los Angeles, San Bernardino, Salt Lake City, the Mojave desert, and even up north to the gold mines. Although the stagecoach and hauling business were doing well, I saw potential in the harbor that could make Los Angeles an economic staple in the west. Initially I wanted to deepen the harbor to allow bigger ships to dock, but I did not have the time or money to make that happen. Instead I invested in barges and tugboats to transport goods from the ships to the docks. Eventually trade started to pick up in the area, so I had enough investors to back my purchase of land which became Wilmington, California. After buying Wilmington, I began investing in more improvements in the harbor.

Hannifin: Since the improvements to the harbor came in during the 1850’s, how did the civil war affect your economic goals and progression during the 1860’s?

Banning: The war put a halt to my improvements of the harbor, but I saw an opportunity to promote more trade in the area. I sold sixty acres of land in Wilmington to the government to create a base called the Drum Barracks. With the new military base in Wilmington, I received government contracts to transport military goods between Camp Drum and Fort Yuma in Arizona. Even though my goals to improve the harbor were delayed, I did not allow my economic goals to be slowed.

Hannifin: It is amazing to see your determination to advance the Los Angeles region despite economic and national issues. With that being said, I pose to you our last question of the day. What were your plans after the war?

Banning: Right after the war my main idea stayed the same, which was the economic improvement of the Los Angeles region. My priorities were to further improve the harbor and to connect Los Angeles to major railroads. After the war I became a state senator and I campaigned to get federal funding for the harbor. Since the process to gain funding for the harbor was moving slowly, I decided to direct my attention to the railroad industry. I felt it was highly important to transport goods through the railroads because it would allow Los Angeles to be connected to the rest of America. Initially I could only make a railroad between Wilmington and Los Angeles, so I decided to negotiate with the Southern Pacific railroad. I struck an agreement with them to connect my railroad with theirs which allowed us to trade in the Arizona and New Mexico territories. Although there were limitations on what I could do with the harbor at the time, I did not allow that to stall any other improvements to the region.

Hannifin: After hearing all your accomplishments in depth, it is easy to see how driven you were to improve the region economically. Your persistence in advancing San Pedro and Wilmington highlighted your ingenuity. When comparing your skills and accomplishments to businessmen in today’s world, none can compare. In today’s world businesses only seek to buy out the competition, none seek out innovative ways to accomplish their goals. For example, Microsoft seeks to sell more video game consoles than Sony in the next generation of gaming, but they have fallen short on any innovative ideas. They simply wish to advance their product by buying out video game publishers to create games specific to their console, rather than finding new ways to strike interest among consumers. This style of business completely contrasts with your ingenuitive style of business. If there is an obstacle preventing you from expanding the economic power of Los Angeles, you do not stop to buy out businesses in other cities. Instead you create innovative ideas to solve these problems preventing your goals. Your dedication to your goals is truly admirable. With that being said, that is all the time we have for today folks. Thank you Mr. Banning for coming today!

Banning: I appreciate you having me on the show!

Hannifin: Thank you to all the viewers, and have a great rest of your day!